I’ve been scared of snatching lately. It was always a lift that I loved to do, even not being that great at it. After my training had taken me in a different direction for a while, I recently returned to Olympic Weightlifting. After recording many many reps on video an analyzing the crap out of my lifts, I have been attempting to fix some technical issues. 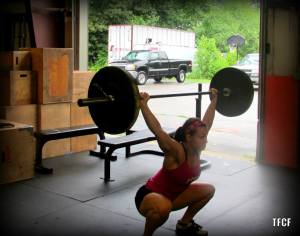 Warming up is very important.

But I am still terrified of this movement. Afraid to pull myself under a heavy barbell.

Until yesterday. It was the first good day I have had snatching in about 2 months. For 2 months I’ve been about 10 pounds under my personal best. Pretty frustrating. After my successful lifts yesterday, and matching my personal best easily, I thought about my mindset surrounding these training sessions. I was definitely beginning to harbor a negative attitude around snatching because I was feeling so shitty about it. I was genuinely beginning to doubt my abilities. I regularly carry a good amount of self doubt which is something I am fighting to not carry, but I was on the verge of giving up on the snatch completely.

I took my time yesterday. I prepared my body with a great warm up and turned up some music that I was really into. It calmed my mindset. Even when I missed reps, I actually thought through why I’d missed them instead of just getting frustrated and quitting. The thoughts in my head were mainly positive instead of negative. It felt really good. It actually made my afternoon much more enjoyable.

Letting the negativity seep into my head-space creates an atmosphere where I cannot thrive as an athlete. We all have crappy training days. Days when we don’t feel great, or feel tired, or what we have in our notebooks is boring. Learning to accept all of that, get over it, and spin it positively helps tremendously. I got a small dose of that reality yesterday and I am going to try to build upon it.

My Most Popular Posts